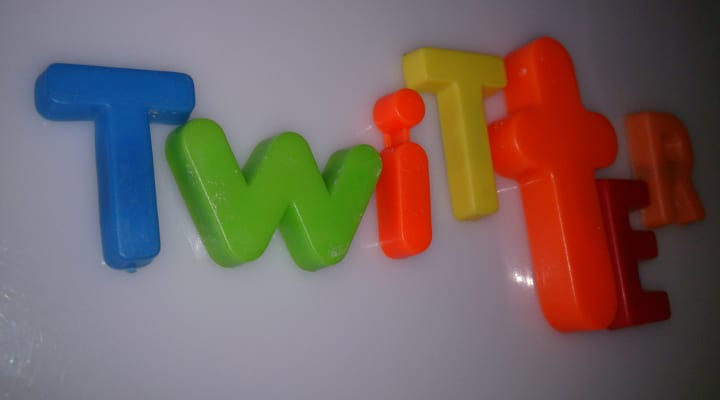 If someone’s following you on Twitter, you have some amount of responsibility to behave in a certain way. Mis-behaving will have your followers abandoning you in droves and kind seriously harm your reputation. So make sure you’re not doing any of these:

It’s always an interesting experience when someone finds you online and strikes up a conversation. It quickly becomes strange however when that person refuses to talk like an adult. We don’t want to name names but here’s a Tweet we’ve received in the past:

As you might be able to tell from the Tweets, this person had a product to sell, specifically a Social Media management solution. As Social Media Managers we take that kind of service very seriously. If we try something new we need to put some form of trust in the company who owns that product. But when someone continually talks like a child it’s hard to have any sort of trust in them as a professional.

It’s fine to contract words or use the odd slang word to shorten a message to Twitter’s 140 characters, but there’s no excuse for extra question marks, un-capitalised “I”s, and words smushed together without a space bar in sight.

What they should have done: If they genuinely struggle with spelling then they should get a hold of a proof-reader. Even sticking it through Microsoft Word would do the trick. Use similar companies as a comparison and see how they talk to their potential customers.

This one brings up a touchy subject. Last year HMV fired a large number of their staff. Amazed an appalled by what was happening, one of the employees running the HMV Twitter account @HMVTweets. It took some time for one of the managers to take back control, long enough for the Tweeter to have their say.

It’s an important lesson in Social Media governance. It’s easy to pass on the Twitter responsibilities to other people and hope you can trust them with it but there need to be rules set in place and back-up plans for when things go wrong.

What should have been done: At the very least the managers should have known the password to the Twitter account. A pre-emptive changing of that password would also have been a wise decision. It was a sad thing to have happened and we have a lot of sympathy for those involved but HMV should have had their Social Media accounts under better control.

3. Posting way too many tweets in a short space of time

I was originally going to say spam for this one, but I wanted to pin-point something more specific (besides everyone mentions spam on lists like this.) Recently on my personal Twitter account I un-followed a writer who had a significant fan base. Why did I do this? Because on Fridays he liked to do a shout out to every single one of his new followers. This meant about 10-15 Tweets, all in a row that were basically just lists of Twitter handles. It filled up my stream and despite complaints from other people he continued to do it.

What should have been done: It’s hard to maintain that personal touch when your fans are in the thousands. But maybe instead of filling up everyones streams with useless tweets, he could have linked to a photo or separate blog post thanking all of them. People still get a quick mention and it’s done in a way that doesn’t annoy anyone else.

4. Posting a link with no context

We have to assume that sometimes this is a simple error. Either that or it’s just laziness. Do people honestly think we’ll click on something with zero context? If you’re posting a link you have to give people a reason to do it. And saying “Check this out!” is just as bad. Don’t make excuses and write something creative.

What should be done: Give context. It’s fine to tease a reader to entice them a little but you have to give them something.

When Twitter started implementing image previews it took some getting used. In some cases it really works, gorgeous photos and images can help break up the endless stream of text. Sadly not all of them are great, they can be out of focus photos or pictures made in photoshop using way too many garish colors. And some pictures just badly need a #nsfw tag.

What should be done: Really think about your audience. Do they want to see your gym selfies? or are they more interested in something else? Think about dimensions too. Will the preview be enough to get people interested or will too much get cut off? Getting an image right can take a lot of work. If you’re not completely confident about what you’re putting out, ask someone else for their opinion.

6. Write posts that take up more than 3 lines

This almost falls in to the same category as number 1. There are also a couple of exceptions, typically when people have used multiple lines to set up a joke or even present their tweet like poetry! Unfortunately too many people use it as a way to claim more “real estate”. If your tweet is bigger than everyone else’s then it’s easier to be noticed. Sometimes you can do this in a smart way and sometimes you can do it in a way that’s sure to irritate.

What should have been done: It’s fine to spread out a post a little but don’t over do it. The same goes for using symbols or caps-lock, everything in moderation.

Is there anything you’ve seen on Twitter that drives you crazy? Tell us in the comments below or find us on Twitter @DISRUPTmg