I did quite a lot of networking last week… 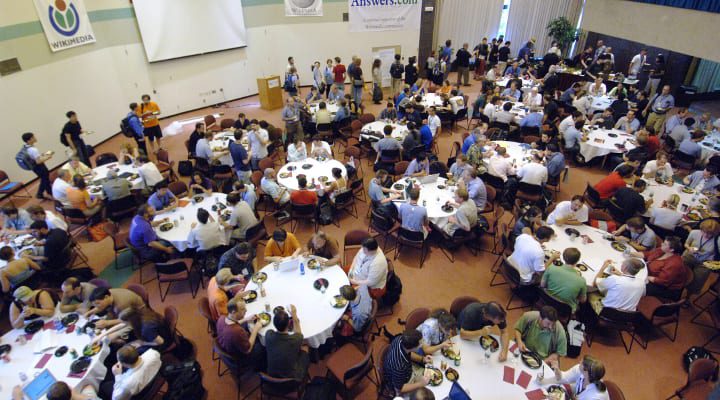 I did quite a lot of networking last week…… unusual for me, but, like buses, several interesting events came along together so off I trundled.
Generally, they were good – lots of new people to talk to and although I didn’t meet anyone I was interested in for my own business, there were a couple of lovely people there who might well turn out to be useful contacts for my clients.
So, there I was, happily chatting away about websites when he appeared, the one person you dread meeting at an event like this. That’s right, the “Networker from Hell” or NFH, as I like to call him. (NFH, as we all know, stands for something else entirely, but it’s also a fitting acronym here too, with the words “no” and “hope” applying perfectly)
We’ve all met this guy. Strides right in from left-field, business card in hand, which he then proceeds to thrust into your unsuspecting hand, while trying to shake the other one simultaneously. Ignoring any other ongoing conversation, he (or even she) then proceeds to bang on about themselves for the next five minutes, asks you nothing about your own business, then strides off purposefully looking for his next victim, leaving everyone slightly shell-shocked in his wake. Fantastic!
Could it get any worse? Well actually it does! In fact, this particular individual has met me before on no less than four previous occasions and yet he still pounced on me as a potential new source of business and treated me as a total stranger. He clearly had no recollection of any earlier encounters. I’d like to think this has nothing to do with me and my ability to make a stunning first impression and everything to do with the fact that he obviously pays very little attention to who he actually meets at these type of things.
This is clearly not networking at its best. What does he really hope to achieve by this approach? I’ve no idea, but I do know what my response to it will always be. His business card will go in the nearest recycling receptacle, never to be thought of again.
In short, he has No Flipping (trying to keep it polite and professional) Hope!
Fortunately, Mr NFH is a rare breed these days. Most people know how to network and are a pleasure to meet and chat to, regardless of whether there’s any business to be done.
But, if most have sorted it out on an actual basis, why oh why do so many fail to grasp the niceties on a virtual platform? I’m talking about LinkedIn here and those individuals you’ve never set eyes on before who send that dreadful standard, lazy message “I’d like to add you to my network”
I bet you would! But it’s not going to happen.
LinkedIn is, among other things, an online networking tool. It works very well if you use it correctly and can be great for getting to know people you might not otherwise get to meet, particularly if they live miles away or even on another continent. I’ve made some very valuable contacts through LinkedIn, by commenting on discussions and generally being sociable, by striking up conversations with others who share similar, as well as conflicting, opinions. I now have a number of contacts across the UK, as well as in America, that I’ve never had the pleasure of meeting face-to-face, but through the conversations we’ve had to date, feel I’ve got to know them fairly well and they have become valuable connections.
The key here is “networking” – it’s just like the face-to-face stuff, but online. So you should act accordingly. If you’re not a NFH in person, don’t be one online. If you want to connect with someone you don’t know, give them a reason to respond to you. Show interest in them and what they do. Start building that relationship. Explain why you’d like to connect. It’ll make all the difference.
Don’t be an NFH.