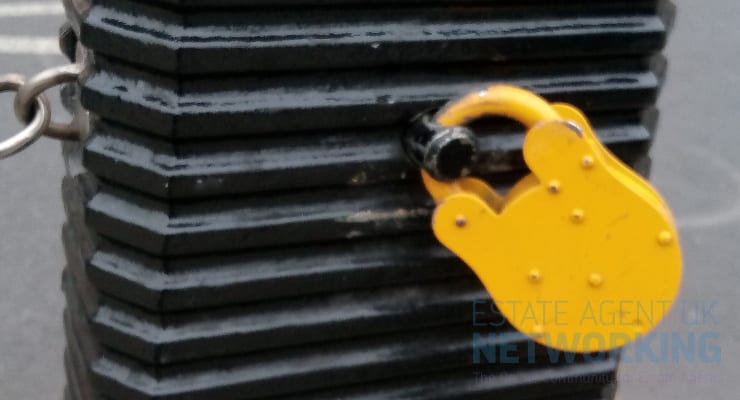 Over the last year there has been a significant change in the way that companies interact via social platforms. There has been a noticeable movement towards social media as a key method of marketing, including the use of direct communication with consumers and other companies to strengthen brand awareness.

Traditionally, marketing involved a ‘funnel’ approach where the largest amount of time and budget was spent on attracting new customers and leading them to conversion. Before advances in technology (notably, social media), it was very difficult to encourage customers to stay with a brand other than by offering fantastic service, so this consumed less of the marketing strategy focus (the bottom of the funnel).
Now, social media (and email marketing) allows companies to utilise relationships with existing customers – reaching out to consumers to raise brand awareness both before and after a sale; a gentle reminder to come back to the company at a later date. Building and maintaining these relationships has become a key marketing method.
Dr Anita Greenhill, senior lecturer at Manchester Business School, agrees that companies are adapting their strategies to incorporate the need for social media interaction.

“In the last six to 12 months there has been a significant change in the way businesses and their customers are engaging together. Social media can be a cost-effective way to promote and grow a business. What’s more, businesses can harness the communications potential of Twitter, for example, to build valuable relationships with customers and deepen networks with potential customers. And, unlike the traditional means of marketing, there are no barriers to entry. It’s free to join and you can set up an account in just a few minutes.

“Social media thrives on network connections. For example, businesses broadcasting across their consumer network can offer their latest discounts and incentives as well as entice the local foot traffic to drop in for a chat.”

But, utilising social media for business purposes shouldn’t focus purely on promoting the company and marketing the products. It is an opportunity to communicate with other companies and customers simultaneously, building a brand or ‘persona’ that is positive and engaging. It is also a way of monitoring the traditional ‘word of mouth’ that continues to play an important part in both online and offline marketing. If an online marketing presence is executed properly, consumers don’t feel that they are being directly and consistently ‘sold’ to.

Dr Greenhill explains: “Unlike traditional forms of marketing, social media isn’t just a broadcast medium. Businesses that make a success of social media, are those who enhance the ‘social’ and ‘networking’ potential offered by the platform, they do this by striking up a two-way conversation with their audiences and networked followers. It is important for businesses to balance communication and not to be too pushy at first. Holding back on immediately sending a link about products or your latest deals is important to build trust and brand loyalty. Communication also needs the potential for feedback and response not a one-way stream of bombarded discounts and special offers. This is considered bad online etiquette and will lose hard-won followers – fast!”

Which companies are successfully leveraging social media as part of their marketing plan?

When done correctly, merging marketing and social media can lead to consumer interaction and even raise interest from a PR perspective. This was shown when Argos tweeted the availability of the PlayStation in a particular store location – aimed to a specific audience. They received a customer’s question regarding when the ‘PS4 tings’ would be in store and responded with this…

This response caught the attention of people on Twitter and was picked up by a local newspaper who published the story, raising brand awareness as a result of a simple, humorous tweet. 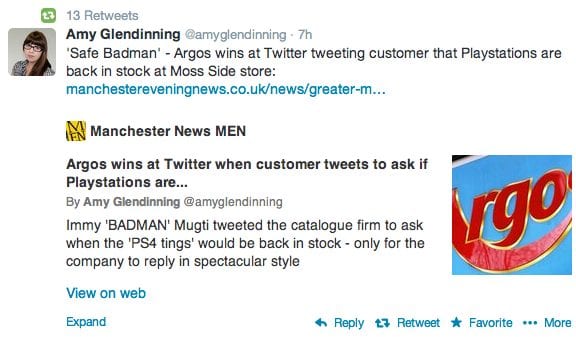 Greenhill says: “Tweeting lets you say something that is influential, inspirational, motivational, or even humorous and light hearted. If the social media message meets the criteria the Tweet will spread quickly and be valued highly by the businesses clients, staff and other business contacts. Tweeting allows businesses to get their ideas out into the public space – whether in the form of updates, quotes, comments or business tips – and these can all spread exponentially in the Twitterverse and other social media platforms. It’s a very powerful way of building a business’s brand equity.”

This is not the first time that a company has successfully used a humorous persona on Twitter as a method of getting noticed as a brand. Here is another example of when companies have engaged effectively on social media platforms with each other and their audience…

After customer @RiccardoEspaa7 opened up a conversation with Tesco Mobile, it quickly escalated into a ‘party’ of companies’ and consumers’ banter. By the end of the conversation, Yorkshire Tea, Jaffa Cakes and Cadbury had also joined in, encouraged by their followers. 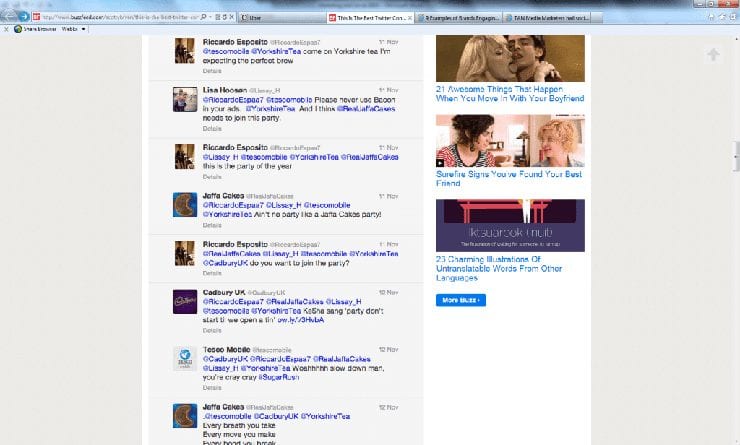 Again this conversation was picked up by others on Twitter and appeared on Buzzfeed as ‘the best Twitter conversation you will read today’. This is online marketing at its best and with very little time and budget spent (if any).

As Greenhill says: ”Companies who are most successfully merging marketing and social media are those who have implemented a strong commitment to building a social presence, as well as having a clear but flexible social media strategy in place.”

If these examples are anything to go by, then it seems that marketing is set to evolve even further. By keeping traditional marketing values at their core and using social media as a platform to continuously interact with consumers, businesses can retain an accessible and engaging brand presence.