Politicians And The Social Party. 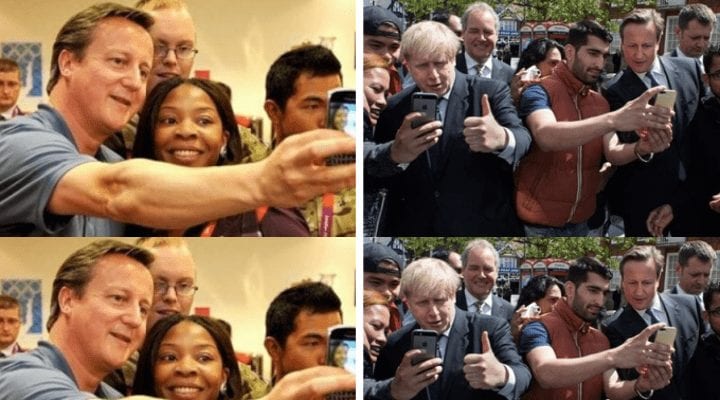 Who are you going to vote for?

During the 8 years in which I have been able to legally vote I’ve never really given this question much thought. This isn’t because I make the same simple decision each time it’s because I’ve never actually voted before! Towards the end of my teenage years I was going to parties and getting drunk rather than supporting them. Then in my early twenties, travelling and moving house a few times meant I never bothered registering to vote. Until recently I’ve always treated politics and the elections a bit like X factor. It’s the same every year, I try to not pay it much attention but I always know who I wouldn’t vote for.

Luckily politics isn’t anything like the X Factor and Simon Cowell doesn’t have an influence on how our county is run. Although a bit of singing and dancing during those long live debates might keep a few more people awake and interested. It would certainly help make politics a bit more appealing to the younger generation of voters. But politicians wanting to engage with the youth and society as a whole have finally realised they need to be a part of the social media party. (Even if they’re not very popular)

Since President Obama’s digitally driven victory in the 2008 presidential election, politicians worldwide have been signing on to social media accounts in order to increase their following. Facebook, Twitter and Google Plus have all become integrated into their campaign strategies and provide continuous engagement with constituents regardless if it’s time to vote or not. These social media platforms provide new ways to stimulate public engagement in political life, where elections and electoral campaigns have a central role. Social media can now be used to engage and educate voters. The older we get the more interest we have in politics simply because we can relate more to the issues at hand and we will be affected more by the outcomes. When I was living at home with my mum, hung-over and working at Sainsbury’s I didn’t care about housing, health and pension policies!

Many potential voters are also disinterested in politics because they feel like they can’t relate to party leaders who are so out of touch with the society they live in. Many people would prefer to watch a clip of a high profile politician getting egged instead of him or her making an important campaign speech. It’s probably more likely to be viewed, shared and enjoyed more on social media as well. The majority of people have a smart phone or easy access to the internet, the reality is that newspaper sales are falling as is the viewership of the 10 o’clock news. So people to people conversation has never been more important, regardless if these conversations are happening face to face or online. A sign of the times is politicians like David Cameron posing for ‘selfies’ with members of the public. There are more smart phones on the high street than there are babies so posing for a picture to seem more ‘down to earth’ has replaced kissing babies on their fore heads. On social media images speak louder than words. To appeal to young voters, politicians have already started sharing their campaigns, careers and personal lives through filters on Instagram.

Social media brings people together of all ages and from all walks of life, so personal communication via these platforms brings politicians and parties closer to their potential voters. Communication becomes quicker and more relevant and it allows politicians to interact with citizens directly without the intermediate role of mass media. Discussions, reactions, feedback and debates are generated online as well as support and participation for offline events. New audiences are easily and quickly reached when messages, images and popular posts are multiplied and shared. Political parties can also use social media to respond to smear campaigns and attacks from rival parties. Real time reactions and live updates can help deal with any damage limitation if required.

The problem with being a high profile politician on Twitter is that everything you tweet will be met with ridicule and abuse. Any mistake you make will inevitably be picked up numerous eagle- eyed reporters. Ed balls became the subject of the ‘Ed Balls’ meme when he posted his own name and nothing else two years ago on April 28, 2011. On April 28th this year Twitter users were celebrating Ed Balls day by tweeting his name (I can’t decide if this was a gaffe or an unintentional stroke of genius). Last year George Osborne’s attempt on Twitter to show he was a normal hard working guy failed miserably. He posted a late night picture of himself tucking into a burger and chips but it emerged this was no humble McDonald’s burger but a ‘posh burger’ from Byron’s. It cost £9.75. Even fellow politicians got involved with the Twitter mockery.

It was almost inevitable that politicians would eventually join the social media party. They might be ignored and laughed at like the stranger alone in the corner; doing the ‘dad dancing’ but we still find them entertaining.
Like them or not politicians play a vital role in shaping the society we live in.
Even if their work offline goes unnoticed, their online antics will always receive attention for good or bad.