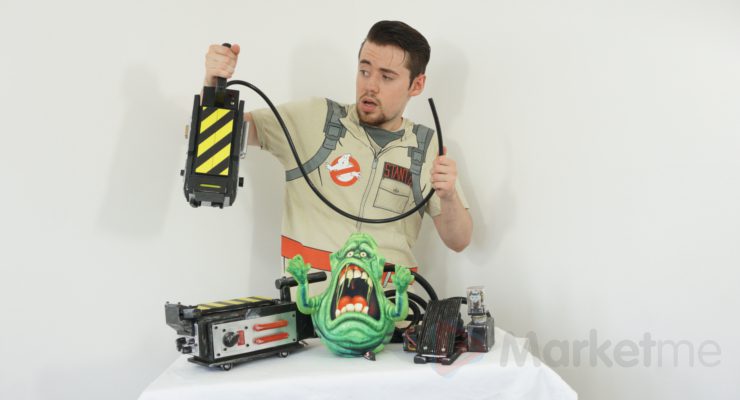 When it comes to movie props then one of the more popular and recognisable examples is from the 1984 movie Ghostbusters – The ghost trap which appeared in Ghostbusters I and II. The ever popular movie starring Dan Aykroyd, Bill Murray, Harold Ramis, Rick Moranis, Sigourney Weaver and Ernie Hudson was released on December 7th in 1984 and grossed 295.7 million USD at the box office.

“ … the ghost trap was used for detaining and transporting “busted” ghosts until they could be safely stuffed into the Ecto Containment Unit. Believed by some to entrap the ghost with a laser containment field, precisely how the trap works was never fully explained in the films.” Source: GBFans.com

Many will remember the green ghost Slimer as well as the Stay Puft MarshMallow Man along with the unique overalls the team wore and extras such as the proton (back) packs and their classic 1959 Cadillac Miller-Meteor Futura Duplex limo-style endloader combination car (ambulance conversion) named ECTO-1. 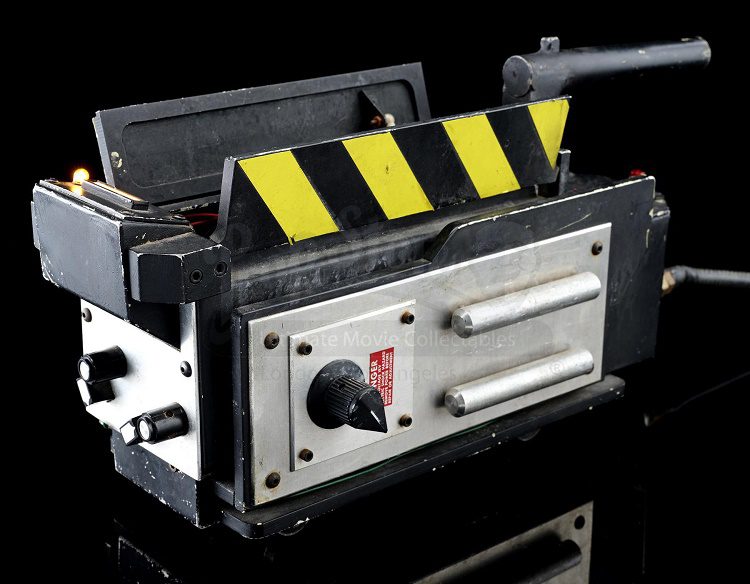 Ghostbusters has fans globally and not a minute goes by without someone sharing a themed photo online such as on Instagram or selling a collectable on eBay – There are many serious collectors out there and many official items to collect from action figures to fancy dress outfits. 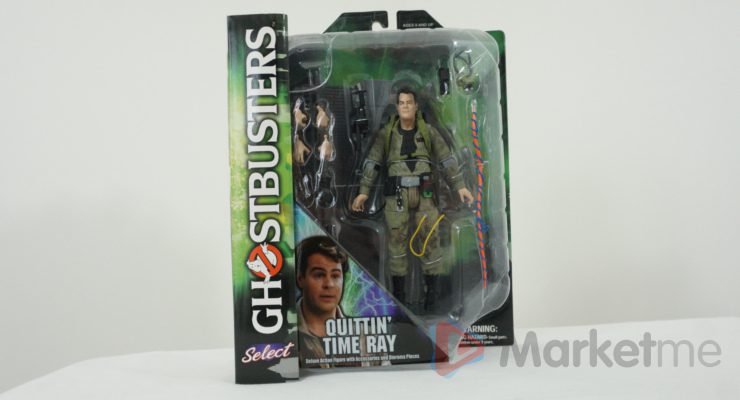 Ghostbusters contains many iconic scenes, characters and props which gives companies looking to tempt in collectors a great variety of items to produce. Brands such as Lego, Playmobil, Playstation, Transformers, Hasbro (Kenner), Oreo, McDonald’s Happy Meal, PUMA sneakers and many more have at one time released products in the Ghostbusters theme. Today a simply search online for Ghostbusters gives an endless supply of items both official and unofficial that you can purchase.

Not only have we the characters to fall in love with we also have some classic quotes including ‘Who you gonna call?‘, ‘Back off man, I’m a scientist!‘, ‘When someone asks you if you’re a God, you say YES!‘ and ‘Don’t cross the streams!‘.

Press play to enjoy many of the Ghostbusters locations at NYC (Video starts at the NYC Library).

I must admit that my recent trip to New York City was to involve a tour of the Ghostbusters movie locations which many stand very much similar today as they did in the movie. You can catch up with the likes of New York Public Library, Rockefeller Center, 55 Central Park West and the famous Hook & Ladder Company 8. See more locations you can visit with a helpful map via NYCgo.com

Lastly, yet not of course least, how can we ever thank enough Ray Parker Jr. who wrote and sang the theme song to Ghostbusters. Also in the movie appeared some other classic tunes such as Magic by Mick Smiley, Savin’ the Day by Alessi Brothers and Cleanin’ Up The Town by The Bus Boys.

Where to buy Ghostbusters Traps?

I researched some options to purchase a Ghostbusters trap online and I was surprised at the amount there are to choose from. Quality and prices vary considerably with both official and non-official examples on offer. From 3D printed to those moulded along with mass produced options and also some precise replications from some very skilful artists.

The cheapest were around £25 for an official Ghostbuster trap available on Amazon (USA) to some decent non functioning examples on eBay for around £50 – Also there are options to purchase the original toy version from Kenner Toys from listings on eBay and Facebook. From there the quality starts to improve as does the detailing and closeness to the original trap (featured in the official Ghostbusters Traps image above). From around £125 there are ones made by craft persons at home or price increases by those made by small businesses to around the £350 mark. The UK and the USA market seem to provide the most options though I noticed them available also in Italy and out in Australia. You can also find online ‘build your own’ kits with the items sold in pieces and also obtain designs for 3D printing (3D Ghost Trap Design downloadable here in Thingiverse). If you are looking for miniature traps to full size again you will have countless options. 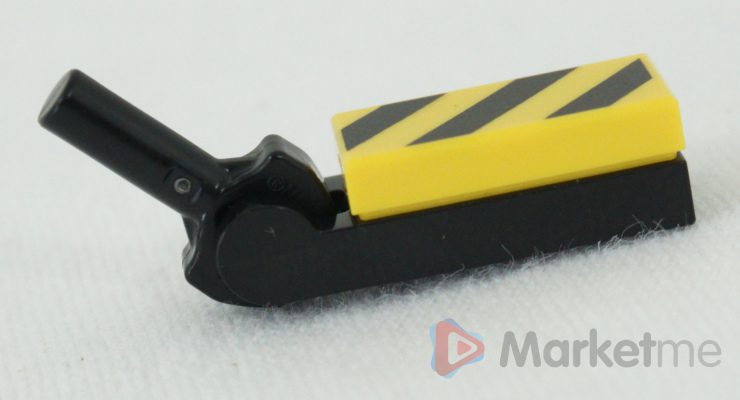 Some of the traps are static, some functioning partially to full functioning to include sounds / lights / smoke (vapour). Lots are at the correct size (size differs in Ghostbusters I where it is bigger and reduces in size for Ghostbusters II) though variations in colours, parts, details, weight and more can be seen to include with or without the pedal and extras such as the wheels.

Prices can still rise up from £350 and I have seen samples around £600 though they are no different, in my opinion, to those at £350 so here I only see profit taking as the reason for the higher value. As with most things in life, when we are looking at ghost traps in the price range of £0 – £350 we will be getting what we pay for in regards to how they look and work so the more you have to spend then the better end product you will have.

There will be serious collectors among us who’d like every detail exact and others who will be happy with something that looks similar to the real thing so we can impress our guests – for sure we will have it on show no?!

Let us take a look at Ghostbuster Traps available for us to buy of which we have narrowed down to just two. So without further ado and enough talking from me, let’s delve in to where to buy Ghostbusters Traps online and our recommendations:

My opinion on seeing the trap on eBay was that it was possibly going to be a too good to be true scenario and the eBay listing title of ‘Ghostbusters Handmade EVA/Craft Foam Stunt Ghost Trap Comic Con Cosplay Prop’ was to mean I’m going end up with a rough and flimsy example. But, no! It’s much better than I expected and I am pleased that I took the risk!

A well packaged and very light Ghostbusters Trap parcel arrived after a few days and after taking it out I was amazed at the attention to detail and overall quality of this example. All visual parts that are recognisable are there, colours are vibrant and detail include a worn look which makes the appearance far more realistic. I knew that this item would have no working parts, merely a detailed body (with pipping) and it would not be robust enough to be used as a toy as per description.

You can also order a blue version of this Ghost Trap (reminds me of the original Kenner Toys version).

Synopsis: This is a perfect Ghost Trap if you are not overly fussed about working parts though still wanting something very realistic that will get people talking. It is not designed for lots of usage so ideally place it down where you want it on show and make sure it is not picked up and played with (pets and children). The price point is very appealing being only £55 – Well worth the money for the effort to put it together. Safely packaged and posted out fairly quickly. 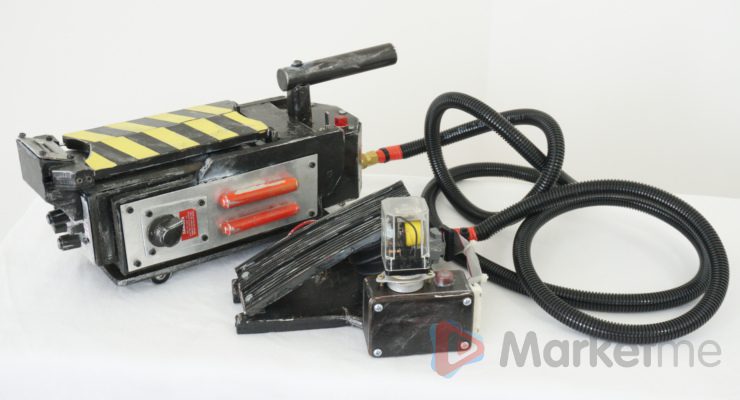 We are moving closer to the real thing here with the Ghost Trap by Christopher Sutton. At a weight that feels appropriate for the trap and certainly built with a bit of more of a robust structure, if you are after selfie shots holding the trap then you’ll be fine! With the unit as a whole to include the pedal, this option really is looking like what you see in the movies. All buttons correct, leads, wires, labels, wheels and opening trap section – You will not be disappointed.

Each trap is hand made at Christopher’s studio where he also undertakes commissions for other movie props including the proton (back) pack if you are after one and also items from other movies including, I saw, a life size model of Yoda from Star Wars. 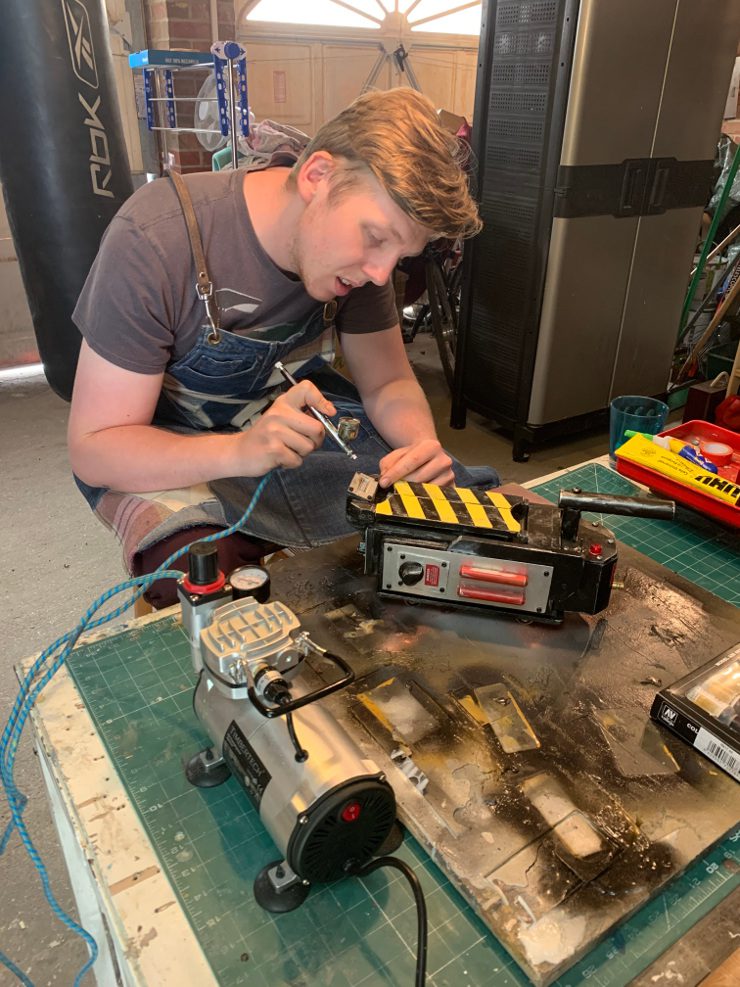 Christopher Sutton at his studio

Attention to detail along with hours of craftsmanship is evident with this option. Yes, you are paying considerably more than the option above, though what you are going to get will likely remain with you for life and with each item discreetly hand signed underneath, you are potentially making an investment too. You will not fail to impress your guests with this unit.

Like a child at Christmas, the excitement filled the air as this sample parcel arrived at our office and we unwrapped the ghost trap. Each peeling away of bubble wrap revealed such fine attention to detail to the unit and once it was in our hands then it just called out for us to quote “We came… We saw… We kicked it’s ASS!”

Synopsis: If you are a serious collector then I feel you will not be disappointed here with Christopher Sutton’s original Ghost Trap design. Not only does it look awesome as a feature in your room be it on the floor or up on the side / in your display unit, close up it also has that WOW effect. You can see that countless hours have gone in to making it, the ‘made by hand’ value is evident and just like a fine wine, this trap will age very well. If you love Ghostbusters, you want to treat yourself to a Ghost Trap and you want to spoil yourself, then go for it!

Please be advised that none of the ghost traps in this feature article will capture apparitions, phantoms, phantasms, wraiths, spooks, specters, spirits or any disembodied soul of a person. Please also remember to not cross the streams & especially for Gozer, you better get Stay Puft outta your mind! Stay safe not Puft!

Founder of Marketme and other online news channels with big social media followings. You will find me mostly writing about property, housing, politics, and fine wine.
Facebook
Twitter
Twitter