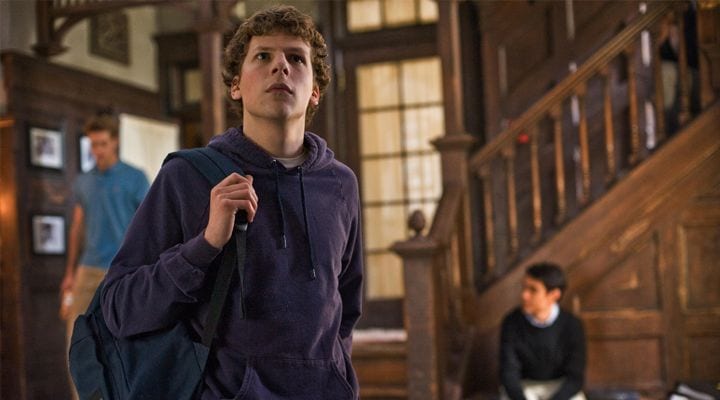 We all know that Social Media is everywhere, all the time, but I thought it would be fun to look at some of the key moments (including a couple of my favourite) where it has branched into Hollywood & the film industry in general. There have been some awesome social media campaigns when promoting films, but I wanted to look at the scenes on the screen itself. It’s crazy to think that without social networks & internet companies there wouldn’t be certain films, actors & actresses wouldn’t perhaps be as well known & the visuals we’ve seen on the big screen wouldn’t have come to life.

Without Facebook, there would be no The Social Network. This one is obvious, the one that anyone would say first if you asked for a movie about social media. It’s the story behind the site, the lives, relationships & friendships which were made, changed & even destroyed by an uprising. I love this film, I think it’s because it’s a David Fincher film & his style of direction is something I admire – the change of pace throughout is perfect. I also love the cast – Jesse Eisenberg playing Mark Zuckerberg is a genius casting. We also get to see the power & dismay of the Winklevii & are shown why Andrew Garfield is worthy of going forward & donning the Spiderman suit. One idea really can change the world, which in some ways is what social media is all about.

Then we have the Owen Wilson & Vince Vaughn comedy The Internship. Whilst it’s a comedy it speaks truth from the start of the synopsis. “Two salesmen whose careers have been torpedoed by the digital age…” – how many people will this relate to? It’s real, & whilst obviously being a comedy with two Hollywood stars shows how different generations do indeed have to embrace change in order to survive in business. Wisdom & experience is one thing, but if you’re ignoring new developments that can make business survive, then maybe you’re not so wise in the first place? I’ve been to the Google offices, they are amazing & whilst there are laughs in this film, it feels like Google’s failed response to The Social Network. It’s a product placement campaign throughout, especially during the end titles!

A couple of other films which include awesome social media references include:

In the Jim Carrey comedy ‘Yes Man’ Zooey Deschanel’s character Allie is in a band. They’re a little, shall we say unorthodox, but one of the songs contains these lines which are brilliant. “Have you met my friend Ian? He’s a computer hacker. He helped me erase your MySpace page, & your band’s MySpace page, & your FaceBook page. Happy networking, a$$hole!” It’s funny because it’s true. Your accounts could be hacked. What would you do? How would you show people a photo of what you ate for dinner?

There are many hilarious part of The Other Guys – of course there are, it’s stars Will Ferrell – but there’s an awesome mention of Twitter by a couple of the other characters. Fosse: “At the crime scene, LOL” P.K. Highsmith: “Good tweet, good tweet.” There are tweets about everything, from everywhere, by everyone. One of the best parts of the film!

Finally, the most recent (& I presume final?) part of the American Pie series. The gang meet up for a reunion and here are a couple of mentions of Facebook, how people take photos of their dinner and have profile pictures of them with their shirts off etc. It’s our social profile, the one that we’re willing to share with the world to perhaps make us appear better than we actually are. One part that got me was the fact that this is a series that began in 1999 & American Reunion was released in 2012. That’s only 13 years, but what a 13 years! When the character of Stifler knocks on a door, asks “we were wondering if we could come in to borrow you phone” & is met with a reply of “none of you guys have cellphones?” he even says the last time he used that line, cell phones didn’t exist. The world has changed loads in 13 years, from only a few people having bricks of mobile phones to now everyone having a smart phone constantly attached to the palm of their hand.

Social Media is growing & I expect to see a lot more references in films as the years to come – anybody heard the rumour about a Twitter movie?