The @Jacqueline_Gold #WOW award for Women in Business on #Twitter. 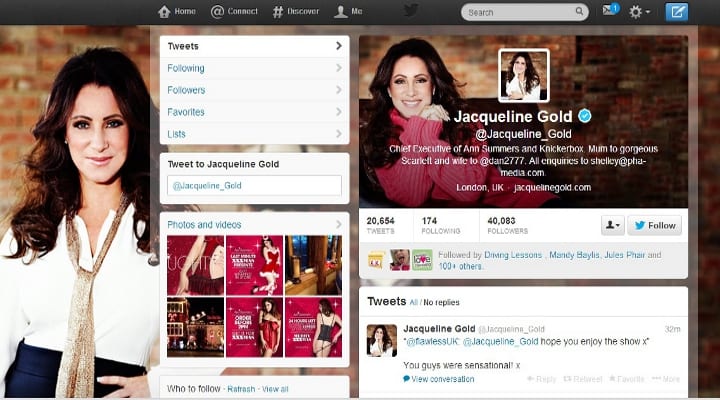 If you are a woman running your own business then you really need to be entering for the #WOW Award from Ann Summer CEO Jacqueline Gold. In June 2011 Jacqueline launched a campaign to support women in business, an area she is incredibly passionate about. Women On Wednesday, or #WOW, takes place every Wednesday 1-3pm and is run through Jacqueline’s twitter page. Each week Jacqueline encourages female business owners to tweet her using the #WOW hash tag along with their business name and a short overview of what they do. Jacqueline then picks her three top entries for that week and re-tweets them to her followers (currently over 30,000). The three winners also receive a #WOW badge which they can display on their company websites.

“Jacqueline Gold is chief executive of Ann Summers and Knickerbox and is renowned for managing a company run by women, for women.”

When selecting the three winners, Jacqueline looks for businesses that are interesting, that have strong brand values and that she thinks have potential to grow and succeed in their industry. She looks for quality products, well designed websites and entrepreneurs who appear to have a good business sense and who have thought about what the consumer wants and how to deliver it.

Jacqueline Gold can be found on Twitter at: @Jacqueline_Gold

The dedicated WOW page on Jacqueline’s website can be found at: http://www.jacquelinegold.com/profile/wow/

The #WOW campaign is very much about celebrating women in business and the ever growing number of women who are starting their own business. The weekly #WOW winners, which currently totals over 100, are incredibly supportive of each other and have formed their own #WOW network through facebook and twitter in which they offer each other support and guidance. Jacqueline stays in regular contact with all of the #WOW winners, offering advice where needed and also asking for regular updates as to how the winners are doing. Every winner has reported a huge increase in visits to their website after winning, with many also seeing an increase in sales. A number of the #WOW winners have also secured press coverage of their win, with pieces in numerous regional press including the London Evening Standard.

Quotes taken from the official Jacqueline Gold website. #WOW is a concept created and owned by JacquelineGold.com