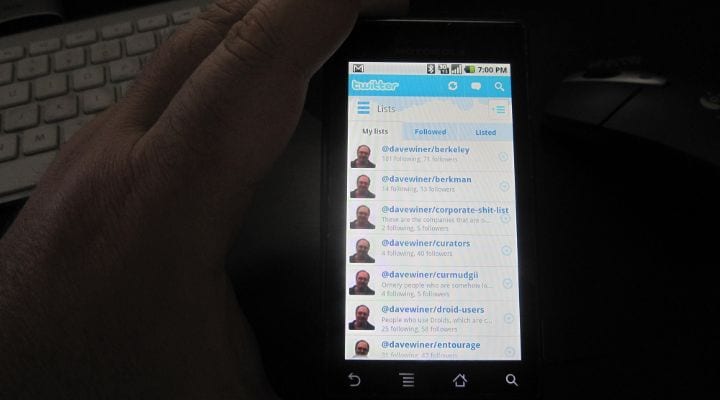 Twitter Lists are a little understood tool in the social media marketers toolkit.

A Twitter List is a collection of your favourite Twitter accounts, all grouped together under one heading. They can be public for the world to see or private just for you.

Other Twitter users can subscribe to your public lists, without necessarily subscribing to you, giving you potentially an additional  distribution channel for your content.  If someone is subscribed to one of your twitter lists they will see all posts by any member of your list.

1. Make sure you are willing to keep your list up to date.

A dusty old list of aging stars, most of whom have moved on from the job that got them on the list in the first place, doesn’t stay useful. The value of a Twitter List for someone subscribed to it is greatest when it is kept up to date.  If you’ve a list of Chelsea football players then make sure you’re keeping up with the transfer market!

2. Market your lists to your followers, they will value you as a curator and you will be part of the community in their minds

Make sure you recommend your lists to followers, they will retweet it, spreading the word about your list and you. Becoming a curator of a list of influencers attaches you and your brand to that influential community.  If I create several lists of all the premiership football clubs, you’ll start to believe I know something about premiership football myself!

That element of exclusivity will give them a buzz and can be a great conversation starter with a potential new contact, especially influential ones. Everybody likes to be invited to the party.

The more specific your Twitter List, the higher the value to others and the higher the likelihood your list will be seen as the de facto leader.  While twitter lists of Chelsea players abounds, there aren’t too many of Chelsea Players that wear glasses. Perfect for opticians wanting to drive interest around their social media presence.

There are some great tools such as a Power Leaderboard, for turning your Twitter List into a live, fluid and exciting content. Check out what Economia did with their list of the Top 50 economists in the world – they turned a list of 50 economists into a vibrant weekly leaderboard by ranking the participants based on their Klout score.  Turning your list into a leaderboard really drives instant engagement from those influencers. If you embed the leaderboard on your website you’ll also drive weekly, influential traffic to your site. What’s not to like about that?