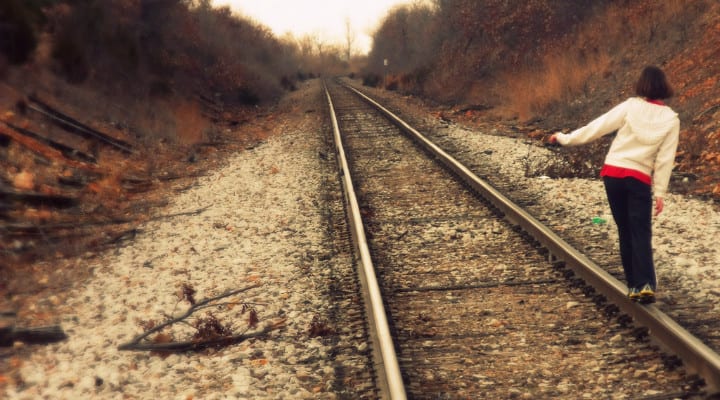 Just because Twitter is a networking tool doesn’t mean your business initiatives have to be tweeted like a press release, full of information but boring in delivery. Interaction with your audience is very important, and a press release-y tone does not provide that. Tweeting at users to gauge their reaction to a product, in addition to responding promptly to tweets directed at you, are a few easy ways to remain interactive. Keep the press releases to the PR outreaches, not your Twitter feed. 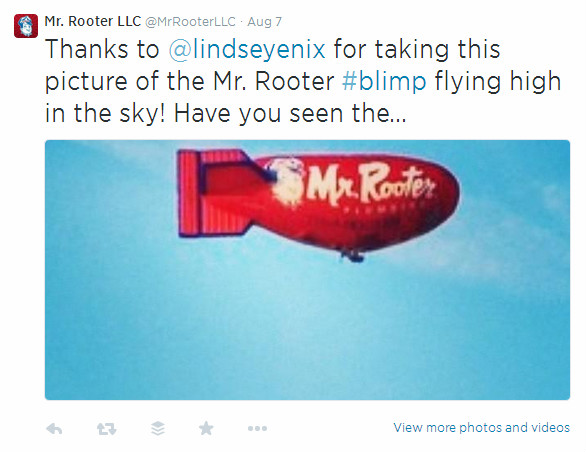 Mr. Rooter has always done a great job balancing promotional material with interaction with their followers. A great example is their sharing this fan-submitted photo of their blimp – it’s self-promotion and interaction all rolled up into one neat package!

If the content on your Twitter feed engages by providing relevant and informative content in a specific niche, it will begin to attract attention from all those interested in it. For example, those seeking jobs in the medical field may follow Farr Healthcare, who tweet about open jobs in the field. They are straight to the point on their Twitter feed, sharing nothing but the information job seekers in the industry need. As intended, followers of the feed will eventually end up on their job openings page. 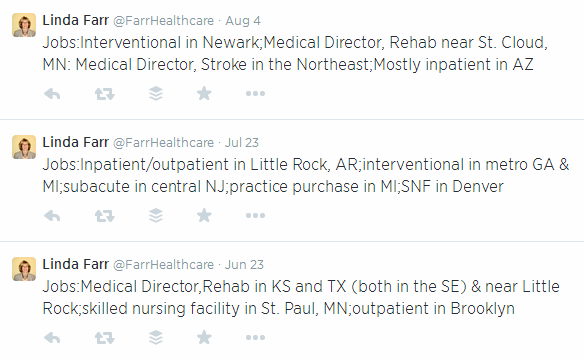 Apart from listing content, it’s important to add a voice to your tweets. Just as a great writer would, a great Twitter user has a unique voice that is distinctively theirs. Whether it’s in the form of funny “dad jokes,” humorous dry wit, or pictures that show the company’s employees together at an event, it’s important to consistently remind Twitter followers that your business is more than just a feed; it’s also a group of passionate employees who care about their product and customers. 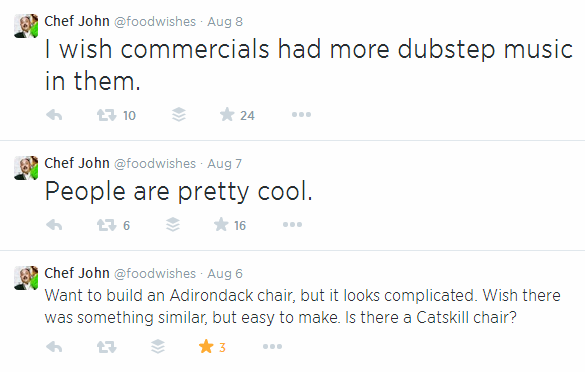 It’s up to your Twitter feed to demonstrate that. One of my favorite examples is Chef John from Food Wishes. His YouTube videos are already bursting with his witty dry humor, and it shines through on his Twitter feed, too.

Promote Tactfully and in Small Doses

Of course, the main reason to have a Twitter feed for your business is to use it as a networking tool, both in the form of engaging customers and attracting leads. This will only have a major benefit if your Twitter followers are converted into customers/clients. Companies who shamelessly self-promote are often ineffective, since no one follows a Twitter feed for advertising.

When promoting your business’s service or products in your tweets, it’s important to do so in a tactful manner, such as weaving the product/service into recent industry-relevant news or replying to a user who is asking the difference between your product and a competitor’s. B2B companies like CAT dealers are quite good at this – just check the NMC CAT Twitter feed for an example. Just make sure not to promote too much, or your Twitter account will draw the ire of your followers, who will have no hesitation to unfollow if the self-promotion becomes excessive.

Overall, Be an Unforgettable Presence That Exudes Passion, Commitment and Confidence

Twitter’s 140-character bytes of information make it appealing to a wide variety of demographics. As a result, most prominent businesses in the world are on Twitter. Just an account isn’t enough, though. In following the tips above, specifically to avoid over-promotion and emphasize engaging interactive content, it’s recommended to always keep in mind that your business’ Twitter feed is a representation of its industry-specific passion, knowledge and commitment, all in bite-sized nuggets. Twitter can be an unbeatable source of leads for your business; it all depends how you use it.